My previous post, Time Beyond Basic Needs Builds Human Capital, proposes that advances in technology, e.g., Artificial Intelligence (AI), robotics, genetics, networks, etc., redefine human capital and how we build it. This trend will impact how we use the limited time we have as living, physical beings on the planet.

Regardless of how long that is for each of us, the minutes we have will be distributed into the five levels of Maslow’s Hierarchy. 1  For many, the bulk of their time will fall into the bottom levels where they struggle to meet basic needs and survive. However, if society partners with technology rather than contends with it, the majority of our time could play in the upper levels of the pyramid where human creativity, inventiveness, and innovation thrive.   Our time and where on Maslow’s Hierarchy we consume it become major metrics by which we measure the effectiveness and efficiency of economic systems in their capability to build and sustain human capital at its most optimal.

The diagram below from Time Beyond Basic Needs Builds Human Capital, superimposes the base-down orientation of Maslow’s Hierarchy onto a top-down version. 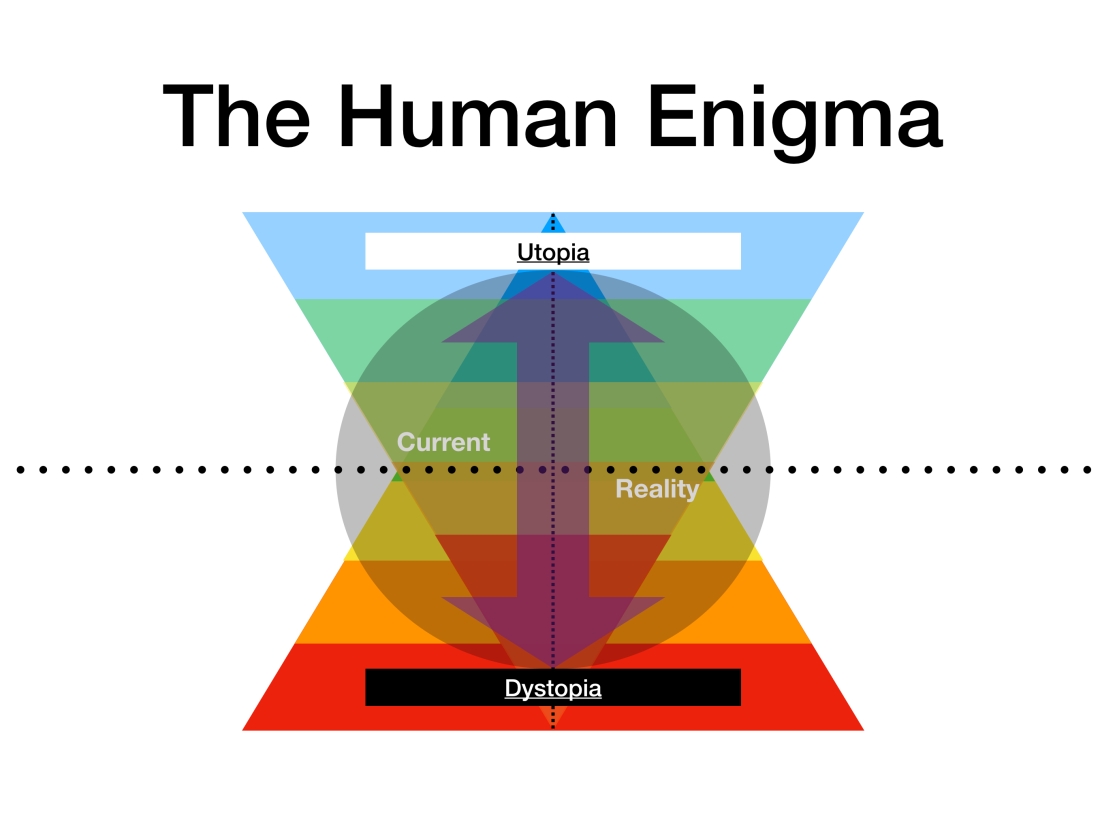 These can be expressed as two economies that play out along a continuum. On one end a money-based economy of dystopian design keeps the majority occupied in the lower levels of a base-down Maslow’s Hierarchy. On the other end a time-based economy of utopian design shifts participation by the majority to the upper levels of a point-down Maslow’s Hierarchy.  Regardless, the two economies not only coexist, they have a clear symbiotic relationship between them.

Despite the interrelationships between a money-based economy and a time-based economy,  the organizing principles that define them as well as the behaviors each produces are quite different.  The diagram below illustrates key defining elements in a money-based economy, 2  3 namely, the central role of money and debt with ties to the organizing principles of ownership, consumption, and pacification. This configuration drives most participants to spend the majority of their time, day by day, in the bottom reaches of Maslow’s Hierarchy in a base-down orientation, which sets rather dystopian limits to upward mobility. 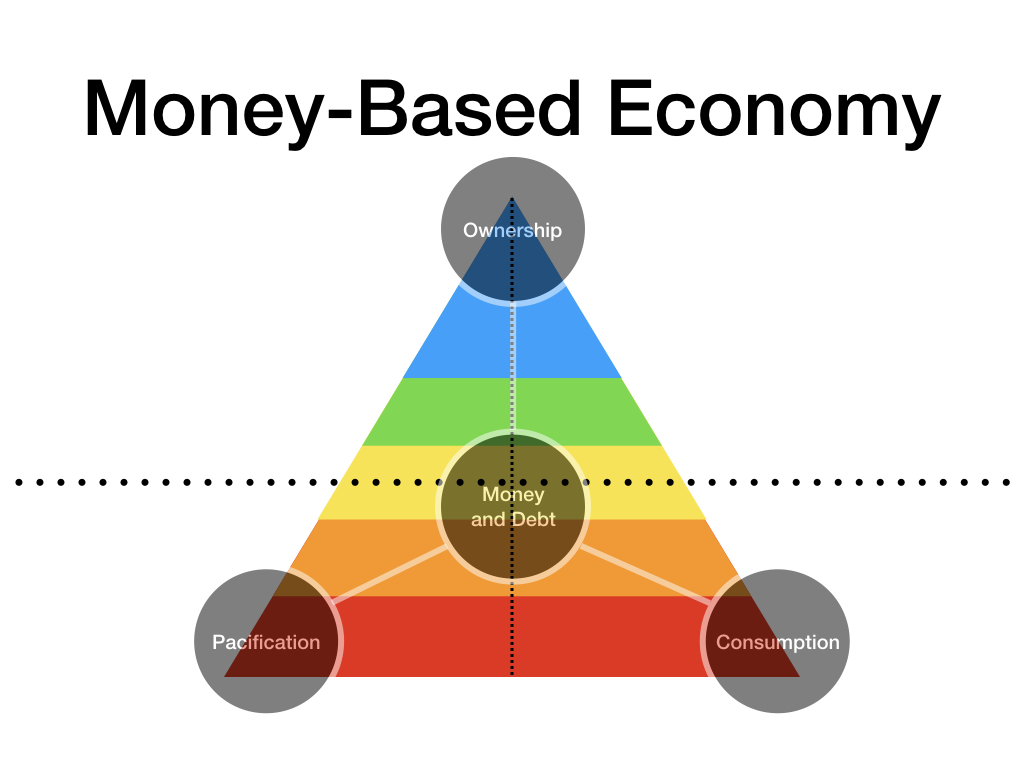 Conversely, the diagram below shows organizing principles for a time-based economy 4 in which time occupies the center with links to participation rather than pacification, exchange in lieu of consumption, and commons instead of ownership. This configuration shifts behavior toward the top of Maslow’s Hierarchy in its point-down orientation, which offers a greater degree of freedom for the majority to pursue more utopian ideals.

When these two economies operate in concert with one another, they set the stage for the emergence of a

…commons-oriented mutual-coordination economy where the concepts of ownership and “legal” do not exist. And anything like “money” is not required. But still, common resources require some people or organizational forms (often a committee) to be responsible for them.

Comment by Bob Haugen in Value Flows-Issue #270 on GitHub

Haugen goes on to recommend reading Elinor Ostrom’s 8 Principles for Managing A Commons by Jay Walljasper in On the Commons, October 2, 2011:

Clearly, Ostrom emphasizes the need for defining who’s in and who’s not, how the rules for use of “common goods” are made, monitored, enforced, etc. This includes “build responsibility for governing the common resource (or “common resource in nested tiers…up to the entire interconnected system”)…” which speaks to the preference for terminology like “responsibility flow” in lieu of “legal flow.”

And that brings us back to the symbiotic nature of money-based and time-based economies within a healthy, adaptive society. Our challenge is not to save one and kill the other, but assure the legitimacy of each for whatever time it takes whereby the basic needs of all are met with enough time left over to enjoy a reasonable quality of life.

Possible steps in how to bring this about will be the topic of upcoming posts.

2 thoughts on “Organizing Principles for a Time-Based Economy”