A local economy delivers needs such as food, water, energy, housing, etc., to those who reside within a specific neighborhood, community, or rural area. Like any social system, its function is predicated on what or who is in the center.

In the diagram below, those who produce goods and services are in the center. From there, the system distributes output across stages of processing, preparation, and retail into a market where people choose to purchase what is delivered from multiple competitive options. Such a design opens up the possibility to purchase needs delivered by providers in the global economy and far removed from the transactional boundaries of the local economy. With such choices comes a reduction in local business revenue, outsourcing of paid work, and leakage of expenditures to provisioners outside the area. Basically, this is the way the current global economy works. It is the antithesis to the intent of a sustainable local economy.

In contrast, people placed in the center of a local economy invite a very different dynamic as suggested in the graphic below. Members of the social system meet their needs as close to the point of consumption as possible. The retail “ring” represents the transactional space wherein people take delivery of a needed product or service after completing its value-added cycle. 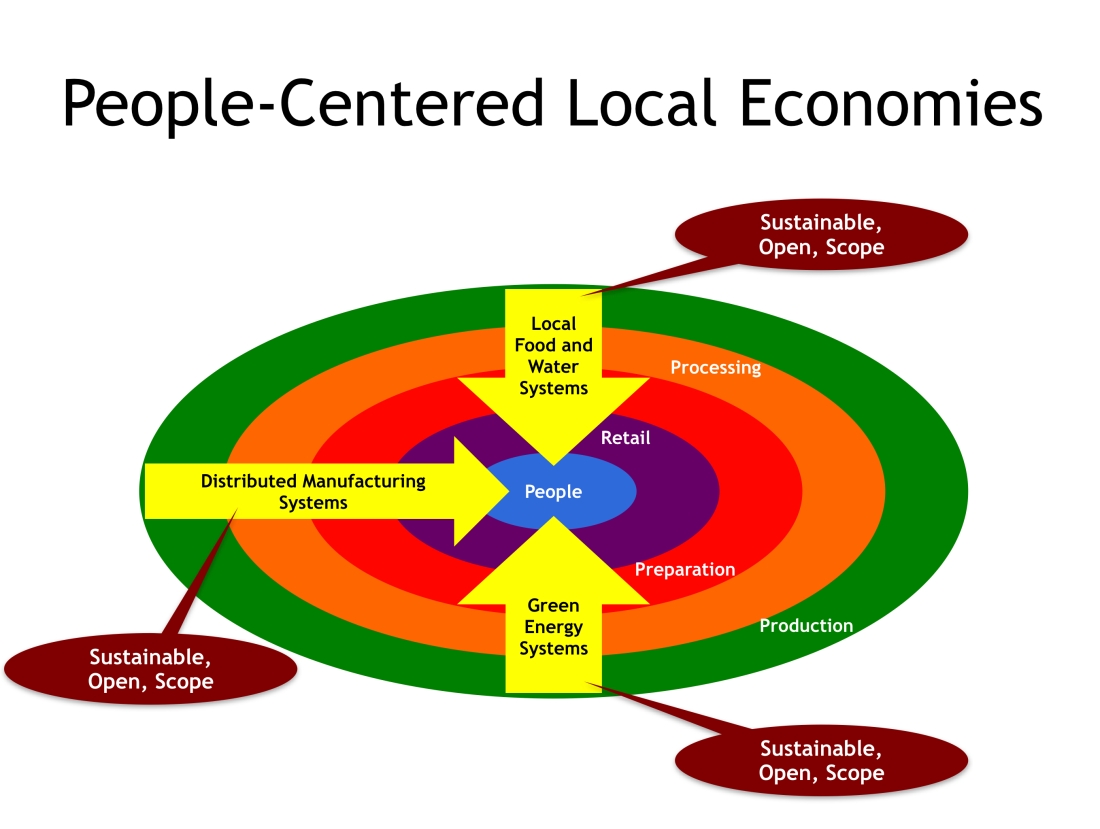 Since people within a given locality share the same basic needs, they, collectively, define a steady market. This stabile and consistent demand invites an interdependence among businesses in the locally-oriented preparation, processing, and production “rings”.

A local economy is, by definition, a needs economy (see At the Bottom of the Pyramid, It’s Looking Up!). The survival and sustainability of people as a social unit depend on whether they can meet their basic needs without interruption. This imperative places people at the center of their local economy. This gives them access to the assets and resources within their purview and grants them license to deploy those means in ways that assure their continuity and reasonable quality of life.

To have production in the center invites those who are not invested in the sustainability of the local system to have control over its destiny. That is not an enviable situation in which to be. What’s in the center of your local economy?